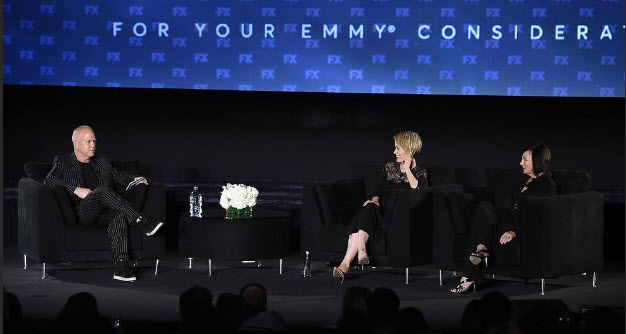 With 22 Emmy nominations and the coveted Television Critics Association for Program of the Year, FX’s The People V. OJ Simpson: American Crime Story is the undisputable critical darling of the 2016 TV awards season. At an event on the Fox Studios lot on August 16, FX paraded these accolades—with a special focus on actress and Emmy nominee Sarah Paulson, who also won the TCA award for Outstanding Individual Achievement in Drama—in front of potential Emmy voters and the press with a screening of episode 6 of the series, followed by a conversation between Executive Producer Ryan Murphy, Paulson and Marcia Clark herself.

Murphy moderated the conversation—jokingly referring to it as his “backdoor pilot, in case Charlie Rose retires,”—which centered around Marcia Clark, both the character portrayed in the series and the real-life prosecutor whose personal life and appearance became the unwitting sideshow of the media circus that surrounded the trial nearly two decades ago.

When asked what she thought at the time about her looks becoming tabloid fodder—as well as the sexist double standard this coverage represented—Clark replied that she was unphased by the negative attention. “I thought it was so ridiculous, and so irrelevant,” she said. One thing that did phase her, though, was the fact that few women came to her defense at the time. “That surprised me, it really did.  There was no one to say, ‘This is bullshit.’”

Murphy concurred on the topic of the sexist double standards of the trial coverage: “Where were people talking about Robert Shapiro’s hair?” He added that he believed such coverage wouldn’t fly in the current social media stratosphere. “I think (outspoken model and social media maven) Chrissy Teigen would be on the case today,” he quipped.

Clark’s dismissal of the coverage stands in contrast to the reaction of the character Marcia, who, as portrayed by Paulson, sometimes crumbles under the pressure of criticism. Paulson had a unique strategy for handling the emotionally weighty role, as well as juggling it with her commitment as a series regular on Murphy’s American Horror Story.

“The good news is: I was playing someone who was very tired,” she said of her role as Clark. “I let myself be tired.” Given that Paulson has received 2016 Emmy nominations for her roles on both Murphy-led series, one could say that this strategy was a success.

When she first heard about The People vs. OJ Simpson, Clark said, she was “really hoping it would fall apart.” When Murphy met her at the series outset and offered to let her screen the entire series in his editing bay, she declined, telling him, “‘I just can’t go through it again.’” Eventually, though, Clark changed her tune, but opted instead to watch the series at home, with the support of friends—as well as “a great big friggin’ drink” in front of her.

But now that the series has made her into something of an unlikely feminist hero, with publications from Vanity Fair to New York Magazine hailing Paulson’s positive portrayal of Clark as long overdue, Clark says she’s grateful for what she believes the series has done to de-stigmatize women working in historically male-dominated professions.

“I think we all kind of get hit with the same shovel,” she said, when Murphy suggested that the media’s scrutiny of Clark has “a modern parallel” in Hillary Clinton. “I think that’s changing now.”

The trio also talked TV. Clark, who has authored successful mystery novels as well as screenplays, announced that one of her scripts, a legal drama called Blood Defense, has been optioned by ABC.

When asked about her favorite series, Paulson confessed to being a Game of Thrones “nut”: “[I’m] like, ‘Khaleesi, NO!’” she joked. Another title on the watchlist of one of Emmy Season 2016’s most-nominated actresses? Netflix’s Stranger Things: “Long live Winona Ryder.”