The Gladstone, Bob Blumer And The Surreal Gourmet - A TIFF Encounter 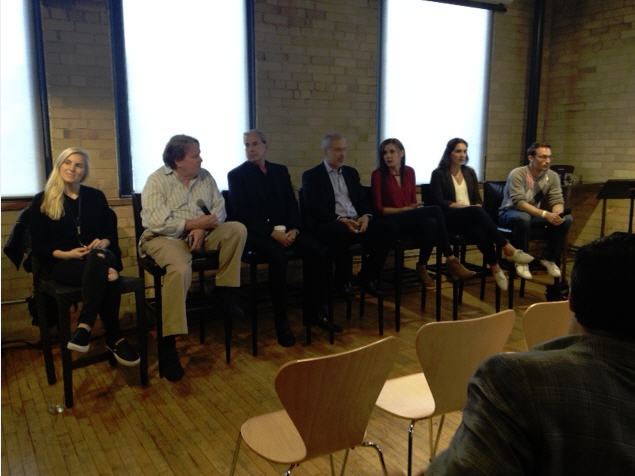 I harbored great anticipation the days leading up to the Toronto International Film Festival. I’d finalized a great lineup of producers for our fourth annual webinar presented along with EP Financial Solutions, PGA and AFCI. Every seat of our live panel presentation was booked. Times and locations for interviews with top ranking producers and below the line artisans were cemented, and I'd successfully RSVPed for several fest soirees.  What I anticipated the most, however, was the experience I’d have laying beneath a giant slice of Swiss cheese as my head rest gently on an extremely fluffy bag of marshmallows.

Searching for the most interesting accommodation within the confines of a tight budget, I discovered the Gladstone Hotel. The oldest continuously operating hotel in Toronto, its classic Victorian style and location in a hip art center just outside the city center were enough to peak my interest. When I discovered each of the hotel’s rooms were designed by native Toronto artists, I was hooked. Clicking through the menu of the 37 unique designs,  I discovered many of their aesthetics spoke to my sensibilities. Once I landed on “The Surreal Gourmet,” designed by Bob Blumer, I knew I found my match.

Blumer, renowned chef and Food Network personality, has starred in and produced a number of cooking shows and non-fiction programming, including “Glutton for Punishment”, “World’s Weirdest Restaurants” and “The Surreal Gourmet.” I was curious to discover how the sensibility of his programs would translate into a functional living space, and to speak with Blumer about the process he undertook in creating it.

Before speaking with him, though, I had to experience the room for myself.

Still sporting its original 1889 façade (when the building was known as the Gladstone House) the interior of the Gladstone Hotel presents a lavish and updated atmosphere. White walls, well-polished wood and hard-wood floors covered with rugs outlined with warm colors pay tribute to the hotel's turn of the century roots. Operated by artists of all disciplines, there is no lack of creative inspiration. Galleries on the second, third and fourth floor regularly feature the work of local artists and employees alike in over 70 art exhibits presented a year.

A nineteenth century gated elevator took me to the top floor where I found my room. I unlocked my door and walked into a bright and airy space, lit by the sun flowing off Queen Street. I immediately encountered Sam, the Fruit Loops toucan, who waved excitedly from the outside of the closet. Its interior was covered with a larger than life image of the colorfully fruity cereal. A brick-backed kitchenette, complete with vintage fridge, blender and a panini maker was set against the west side of the room. Above the shelves dotted with plates, glasses, a martini shaker and food mascots was a chalkboard list of wines Blumer personally selected for thirsty visitors staying in his room.

Feeling a little like I'd entered Wonkaland (Blumer smartly included “Charlie and the Chocolate Factory” in the room’s library of food-themed films), I began to recognize the strategy Blumer used in designing his room. The area featured a clean and open space  with a generous dash of whimsy sprinkled along the surface. I spent my time in the room making paninis and coffee drinks before the TIFF activities forced me out.

Despite his current Los Angeles residency, Blumer regularly returns to his native Toronto.  He’d been a frequent guest of the Gladstone Hotel, and stayed in many rooms before expressing his desire to design one of his own. He had no preconceived notion of what he’d do with his design, he just hoped a space could be optioned for him.

“When I first asked, I didn't know what room I would get, or what the guidelines would be like,” said Blumer. “I didn't know if food would be involved.”

Gladstone president Christina Zeidler, an award winning Canadian film and video artist, informed Blumer he had received from one of the hotel’s three rooms with a kitchenette. After discussing the modest budget assigned to the room and basic hotel guidelines, Blumer was set free to realize his creation. With a hit series and cookbooks under his nom de plum “The Surreal Gourmet”, he decided to keep the name's association in endorsing the joy food can bring.  He loosely based the room's design on his own kitchen.

“It has the look and feel of 60s food iconography,” said Blumer.

From an early age, Blumer has been an artist who’s designed and built a wide range of objects. He illustrates his own cookbooks and fully accessorized the “Toaster Mobile”; a trailer sporting two giant slices of toast he drove on a three-month US tour. As he approached the design of his Gladstone room, he discovered some unique considerations the space required.

“There are some different needs you have to pay attention to in a hotel, such as leaving room around the bed for housekeeping to move around quickly,” said Blumer. “I tried to make the room fun and whimsical on one hand and functional on the other hand.”

Working with 230 square feet, Blumer incorporated functional elements that maintained his retro vibe without over-burdening the space. A metal dinette with two chairs flanks a wall opposite the kitchenette. Thin, linear orange lamps swing from the end tables, lighting any angle while occupying virtually no space. Their color connects was the comfortable desk chair parked under a split-level surface that houses snacks for purchase and the DVD archive.

Some of Blumer’s most creative, self-built elements enhance the room’s whimsy through the unconventional surfaces they're placed on. A 4’ x 8’ plywood Swiss cheese slice hangs suspended above the bed as recessed lighting playfully outlines its edges and holes. A wine glass chandelier hangs in the kitchenette area. Controlled by a dimmer, one can allow softer light to romantically filter amongst its stems and curves. A large, chocolate glazed donut (“The jimneys are dowels,” said Blumer, who built the piece out of plywood) looks delicious in spite of its' bathroom placement. As weary travelers collapse on the bed, their heads lay on pillowcases that Blumer designed to look like over-sized bags of marshmellows.

“It was one of my happiest moments designing the marshmallow pillows,” said Blumer.

Balancing the space are three large images taken by Canadian photographer Fauste Facciatone: the Trix Rabbit , Planter’s Mr. Peanut, and the Pillsbury Doughboy (items photographed from Blumer’s personal collection.) Having previously brought a Facciatone print from a local Queen Street gallery, he realized she could bring the best sensibility to the imagery he wanted to display.

“I had contacted Fauste as a fan,” said Blumer. “I wanted a dialogue between the mascots in the kitchen on the photographs. I knew she could capture the feeling.”

Currently Blumer is developing a new series that will present a cross-country journey – by bicycle - that will explore fun and fascinating food along the way. He also hopes to collaborate with Facciatone on a series of food icons photographs, including Bob’s Big Boy and Colonel Sanders. While his trips to Toronto are sporadic, he does visit the Gladstone whenever he's in town, staying in his room when it's available. He particularly enjoys hearing about the experiences visitors have had in “The Surreal Gourmet.”

“I'm honored you were inspired to do that,” said Blumer, referencing the panini photo I sent him. “I love meeting people who are staying in the room and to hear about what they are experiencing. It makes it an ongoing interactive art exhibit.”

To learn more about the Gladstone Hotel, please visit: http://www.gladstonehotel.com/