Using Premiere Pro to Create Eye of the Beholder: The Art of Dungeons and Dragons 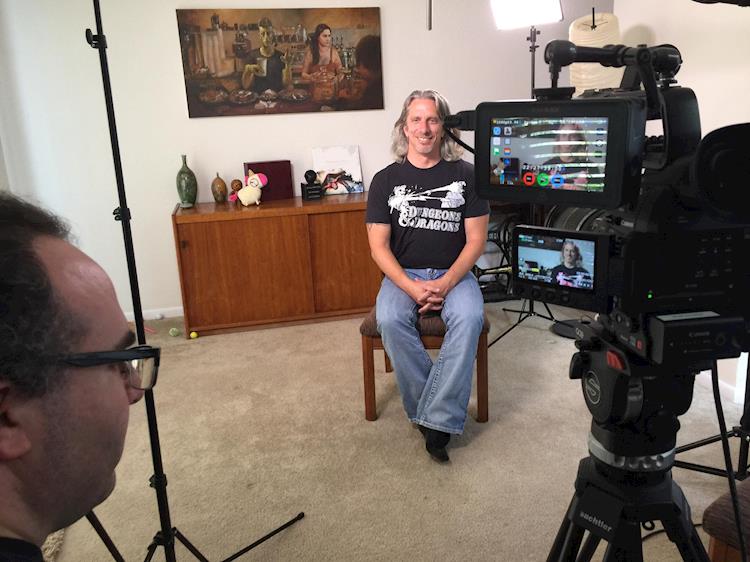 Co-directors Brian Stillman and Kelley Slagle take us on a journey with the latest documentary Eye of the Beholder: The Art of Dungeons and Dragons, from the role-playing game’s 1980s introduction to its modern heyday, celebrating the prolific artists who visualized and defined its expansive world along the way.

Kelley also edited the documentary and selected Premiere Pro to balance a mix of archival footage, images of artwork, and new interviews with artists to shape the decades' long story.

Kelley and Brian have a history of exploring gaming culture and fandom in their films. Kelley directed the 2014 feature Of Dice and Men, and Brian is the producer behind Plastic Galaxy: The Story of Star Wars Toys and the Netflix doc series The Toys That Made Us. Eye of the Beholder won Best Documentary prizes at the Gen Con Film Festival and Clifton Film Celebration.

We also speak to Sound editor Seth Polansky in this interview, who used Audition to clean up over 120 hours of dialogue for the film.

PH: What led you to the industry? What got you interested in gaming specifically?

Kelley Slagle: I started out as an actor in independent film and became fascinated with what goes on behind the camera. I formed my own production team, Cavegirl Productions, to participate in the 48 Hour Film Project back in 2004, and I’ve been producing and directing shorts, web series, and features since then. I began editing in 2011 and am now a producer and editor of industrial and training content and speaker on producing and editing topics at industry events like NAB.

In 2013 we made our first feature film called Of Dice and Men, based on a play of the same name that was written by a friend of ours. It was a dramedy about a group of roleplaying gamers and what happens when on of them enlists to go to Iraq. I had always been what I call gamer adjacent - I spent a lot of time with gamers, my husband is a lifelong role-player but never was really one myself. But during the making of the film I really came to appreciate what gaming can mean for people and their friendships, and I became more interested in and started playing Dungeons & Dragons.

PH: Can you talk a bit about Eye of the Beholder. What drew you to the project?

Kelley Slagle: My husband Seth C. Polansky, who is also half of Cavegirl Productions as both our audio engineer and legal consultant, and I met another filmmaker, Brian Stillman of X-ray Films, during a screening of Of Dice and Men. Brian had made the documentary Plastic Galaxy: The Story of Star Wars Toys, which was screening at the same venue, and we struck up a friendship. It was he who originally had the idea for Eye of the Beholder as a lifelong fan of the art, and he approached us about partnering on the project.

The art is integral to the play of Dungeons & Dragons and is key to immersing yourself as a player in the world and its characters. The game almost entirely takes place in your imagination, and the art provides an anchor point for it that everyone at the gaming table can share. The art was formative for so many people’s childhoods and fuels their imagination still as adults playing this game and collecting its artwork, and I’m thrilled to be able to highlight this work and bring the behind the scenes to life.

PH: With Eye of the Beholder, what pre-production choices did you have to make?

Kelley Slagle: Dungeons & Dragons was over 40 years old, so our biggest concern was that we had a good representation of artists and other interview subjects over that time period to convey our story and pay proper homage to the art. We knew we couldn’t interview everyone, but we arranged to interview as many as possible.

We knew we would have to place an emphasis on gathering the artwork, which again spanned over 40 years of pieces. We contacted collectors and started acquiring or finding books that we could scan. Ultimately we would have over 1,400 items to pick from for the film.

We also knew we wanted to avoid making the film feel like a slideshow, and while we planned for movement and interesting transitions in the display of the art, we actually arranged to have some of the art animated. We also planned for additional animation of stories that artists would share from working at TSR, the original publisher of Dungeons & Dragons - stories that it would be impossible to have footage of.

PH: When editing, what influenced your choice of Premiere Pro and Adobe Audition?

Kelley Slagle: I had been editing in Premiere since 2011, so familiarity obviously was a factor in using Premiere Pro but its organizational capabilities were paramount. With a documentary, there is not usually a script to follow, so the need for meticulous organization is even greater than it would normally be on a film project.

I knew that in addition to taking advantage of the Metadata Workspace, I would be living in the Markers panel. A significant portion of my time would be spent logging, organizing and marking footage. I knew the process would involve taking each interview, 40 of them and 72 hours of footage, and using markers to explain each and every sound bite. The ability to find, sort and navigate with those markers would be key to how I constructed the story.

Being able to easily move from Premiere to Bridge and Photoshop was also going to be key as I made selects from 1,400 pieces of art. I used Bridge as my visual guide to the artwork and brought pieces directly into my project from that. Then, I would be able to make edits to pieces of art with Photoshop and see those changes immediately reflected in my timeline.

Staying in the Creative Suite with Audition for audio was an easy choice as well, as I knew it offered everything Seth needed for repairing and mixing our dialogue and music.

PH: What were some of your favorite directing choices for this film and why?

Kelley Slagle: Our wish was to not only delve into what makes great Dungeons and Dragons art, namely the ability to tell a story within a single frame, and the technical considerations in making it, but to get the great stories of the artists themselves and their time working at TSR. It’s those stories and the sense of what it was like to make this art for this game that really helps bring it to life. We also wanted to clearly portray imaginative realism in a way that puts the artists and art on the same level as other types of fine art and gives them and it the credit we feel they deserve.

PH: What influences your decisions as a director and editor? How do they mesh together, if at all?

Kelley Slagle: With documentary the ability to juggle choices to form a compelling story is key as director and editor. Everything must serve to tell the story. So for me, they meshed together completely. I co-directed with Brian Stillman, who brought the institutional knowledge of D&D and its art to the table as well as a journalism background. Brian and I would bounce ideas together on set, but I feel a lot of the direction occurred in the edit between both of us making decisions and putting forth ideas to consider.

PH: What accolades has the film received so far?

Kelley Slagle: An early cut of the film garnered us Best Documentary at the Gen Con Film Festival, which takes place at the largest tabletop gaming convention in North America with over 60,000 attendees. That screening was also special because a lot of the artists featured in the documentary were able to attend. We also picked up Best Documentary Feature at the Clifton Film Celebration in Virginia a few weeks ago.

PH: What other projects are you looking forward to working on?

Kelley Slagle: Seth, Brian and I are currently in the very beginning phases of doing another gaming-related documentary which I can’t reveal the subject of just yet, but we are hoping it would have the same appeal nostalgically to gamers as Eye of the Beholder.

PH: Can you talk about why you went with Audition to clean up over 120 hours of dialogue for the film?

Seth Polansky: In all honesty, I used Audition primarily because my wife uses the Adobe Creative Cloud. Using Audition allowed us to round-trip things seamlessly. It worked exactly as expected, and, at the end of the day, that kind of time-saving was invaluable.

Additionally, I used Audition because I’m familiar with it. We used Creative Cloud on our last feature film project “Of Dice and Men” and I didn’t want to “rock the boat”.

PH: What are challenges associated with going through so much film?

Seth Polansky: Kelley really had the heavy lifting here. She had to construct the story out of the footage. All I had to do was make it sound good.

Some of the challenges I, personally, faced were caused by the audio in interviews that I wasn’t on set to record. For example: i) removing the sound of a chainsaw from one of the interviews, ii) reconstructing some dialogue that had been clipped due to improper gain staging, iii) removing the sound of someone tearing off sheets of tin foil during an interview, and iv) just trying to make sure that the transitions between shots matched as closely as possible. (We had some interviews shot in cavernous rooms and recorded with a boom, and some shot in intimate apartments with lav microphones. I had to apply some “de-reverbing” to the former, and actually add some reverb to the latter – such that when you hear them in the film, the juxtaposition doesn’t jar you out of the narrative.)

PH: How long does this type of process usually take?

Seth Polansky: It took me about 80 hours all told. I would have like to have spread that out over a month, but we didn’t have picture lock until about 15 days before the film was due to the distributor. And while I would love to make movies with my wife all day, every day, I actually run a law firm for creatives, and I have to devote most of the business day to the firm.

PH: Any roadblocks? How'd you fix them?

Seth Polansky: The biggest roadblocks were related to timing. I’m only one person, and I only have so many hours in the day. Not to mention the fact that ear fatigue is a Real Thing.  I can only work so many hours before ear fatigue sets in and mistakes are made.

PH: How does this type of clean up shape the outcome of the production as a whole?

Seth Polansky: That’s a great question! Our first feature was narrative. We either had the audio we wanted or had to do ADR. With a documentary, we can’t really do ADR, so there weren’t really any “do overs”. If the interview subject was saying something really good, we were going to use it.  Even if it had a chainsaw going on in the background. In a documentary, some audio flaws are to be expected and are usually forgiven by the audience. Most rational people understand that this is Real Life, not a studio, and stuff happens.

All that said, there were a few shots that I just put my foot down and said, “I can’t salvage this”. Thankfully, none of them were key to the narrative.

View the trailer for Eye of the Beholder: The Art of Dungeons & Dragons.