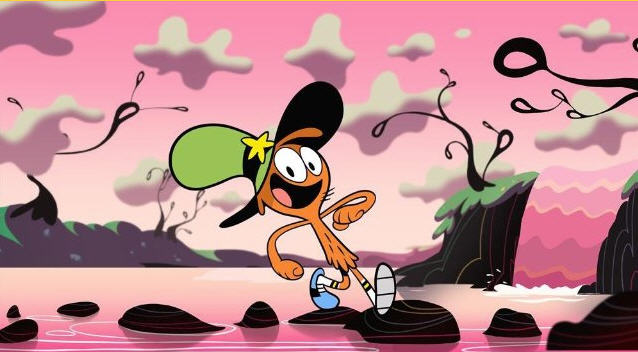 Craig McCracken is a name animation fans know well.  The art director behind “Dexter’s Laboratory” and creator of “The Powerpuff Girls” and “Foster’s Home of Imaginary Friends” has been delighting audiences with his unique visual style and clever writing for over two decades.  Along the way he received ten Primetime Emmy nominations and two Emmy wins.  McCracken’s latest addition to his animation repertoire is a character he developed six years ago.

“I sketched this character in 2007.  I wanted to develop something that was 100% intentional, not something filled with subtext,” said McCracken.  “He started to come to life for me, this being that’s curious, filled with love, and wants to do good things.  I wanted to do a story on this.”

The original conception of Wander was for a comic book format, however once McCracken found a perfect personality fit for his friendly, furry guy, the animation possibilities were apparent.  He saw Wander as an intergalactic explorer, however he wanted the environments to be more surrealistic and less science fiction based.  He used some of his favorite animated content from the sixties as inspiration, primarily The Beatle’s film “Yellow Submarine,” Terry Gilliam’s “Monty Python” animation, and “Professor Balthazar,” a long-running Croatian/Yugoslavian cartoon.

McCracken, who was raised by an art teacher mother, feels color theory is part of his internal “fiber.”  He wanted to explore fun colors and textures in each episode of “Wander Over Yonder” and have the colors inform the audience, preschoolers (and their parents), as to the mood of the story.  He works closely with series art director Alex Kirwan to introduce a new palette into every episode.

“Part of the fun of the show is that Wander is in a new location every episode.  This allows us to pull in different influences to create unique places,” said McCracken.  “We want them to feel like the turn of the century and like a fantasy.   We can do a different design to fit the episode.  The writing, the acting, the music, the color and the art direction are the elements that define the story.”

McCracken’s team works with a studio in Canada that completes the digital animation.  While the animators have the ability to introduce hand-drawn aspects, McCracken wanted the animation to be generated by digital puppets to maintain consistency of the characters throughout the series.  While most animation is done in Korea, McCracken is thrilled to be working with a Canadian studio.  In addition to their excellent graphic skills, he feels a command of the English language translates into accurately capturing character’s expressions and performance.

Wander’s upbeat, positive, loving nature, while refreshing in a world dominated by cynicism and mean-spiritedness, might at times be foreign to the viewer.  McCracken decided Wander should be teamed with a classic “odd-couple” partner, someone the audience would be able to relate to.  Enter Sylvia, Wander’s loyal stallion.  Sylvia is practical, down to earth, and is always Wander’s keeper, ensuring he is both protected from outside forces as well as his own inquisitive impulses.  While the viewer may learn a great deal about the benefits of friendship and maintaining a positive outlook, McCracken points out the show is designed for pure enjoyment.

“The show is not designed to be educational, it’s more pure entertainment and humor,” said McCracken.  “We’ve made Wander the real nice guy who always finishes first.  With the villain, Lord Hater, the goal isn’t for good to overcome evil, but to enjoy watching the bad guy fail.”

McCracken was delighted to surround himself with talented staff and was able to make the ultimate casting coup of securing Jack McBrayer to voice Wander.  When it came time to select a theme song, McCracken was smitten with the Two Man Gentlemen Band the moment he heard their submission.  The band’s brand of American roots music captured the sense of exploration and wonder and embodied Wander’s upbeat, quirky personality.  McCracken asked Andy Bean, leader of the Two Man Gentlemen Band, to not just supply the title track, but score the series as well.

“Five or six months ago I never imagined doing anything like this,” said Bean.  “I was just writing songs and never considered doing anything more than touring.  Now that I’m in it, I love it.  It’s incredibly fulfilling.”

With no composition background, Bean approaches the score by sitting with his banjo and improvising.  He explores the emotion of the character and the scene, and then builds upon this like blocks, with layers of different instruments, all performed by him.  If he needs full orchestration, he’ll use sample programs for these sounds, however the majority of the score is based upon traditional roots music: acoustic instruments like the banjo, the steel guitar, kazoos, even jugs.

Aware of the show’s goal to entertain, Bean is focused on emphasizing the comic timing.  The instrumentation is never crafted with funny sounds or gags, rather, it’s staged in a way to set up the jokes and provide a beat to allow the writing and the characters to emphasize the humor.  Initially the process took Bean up to six weeks to score an episode.  However, he has become more practiced, completing a score within two weeks.

“I don’t work from a complete idea, I’m more like Wander.  I just have fun, and weasel my way out of tight spots,” said Bean. “I don’t even have a jug!  I make jug sounds with my mouth.  Maybe it would be easier if I got one, what do you think?”

To learn more about “Wander Over Yonder,” click : http://disneychannel.disney.com/wander-over-yonder

The Importance of Diversity and Inclusion in Film