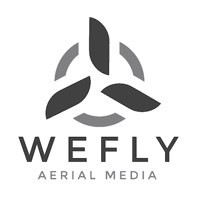 WEFLY is an aerial media services provider. We use drones, cable cams and helicopters to get the shot safely.

All drone operations are FAA 333 / 107 or Transport Canada SFOC compliant, and we carry the proper authorizations and waivers to fly in cities across North America. All operations are covered under a $5 million aviation liability policy and we meet the requirements for all major studios & networks.

With teams in Miami, LA, Las Vegas, NYC, Atlanta, Austin, Chicago Vancouver, & Toronto we are able to fly “on location” across the Americas and in international destinations including Bahamas & Europe.

Our rates include aerial permit coordination at both the local + federal level.

We Fly Aerial Media can be found in the following category: