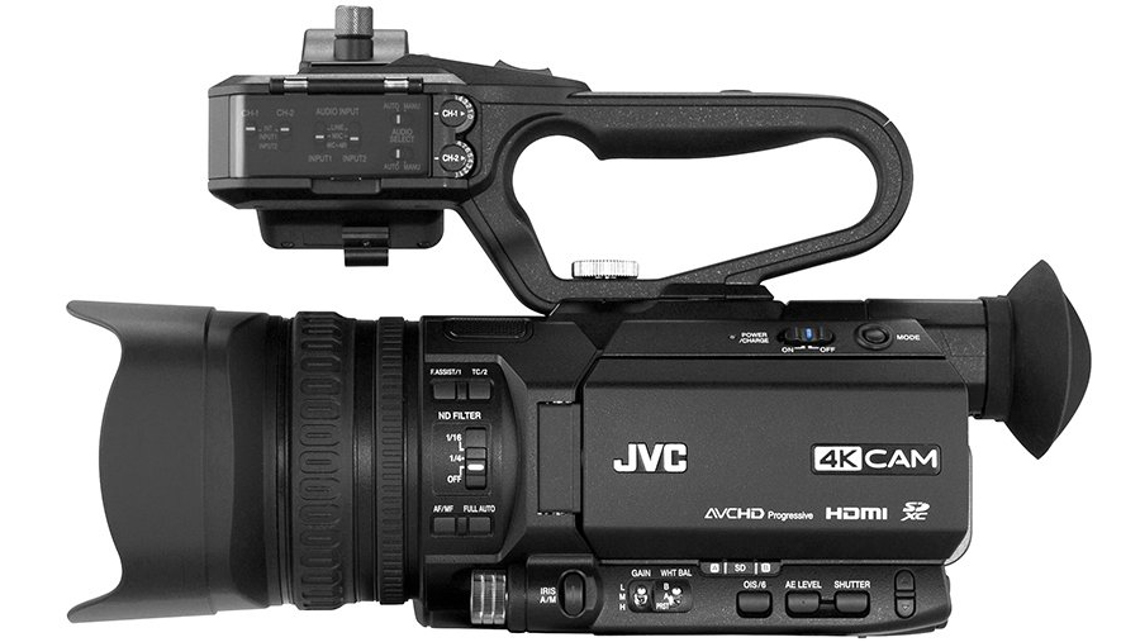 No too long ago I had the opportunity to take delivery on a JVC GY-HM250U Camcorder. Having looked at the GY-HM250U before, I knew the camera had an affordable price point and had performed well in a variety different productions.

This time around I was asked to take a closer look at a few of the features that make this camera a good choice for right now and the future. As we all know too well, the face of production seems to be changing daily. How we create content has changed enormously, such as changes like social distancing, field remote production, and even whole segments done from the living room, kitchen, or isolated studio. The more I thought about it, the more it made sense to revisit this little powerhouse of a camera.

The JVC GY-HM250U Camcorder is a good choice for many different production looks. Contrary to popular belief, there is still a fair and varied amount of production going on out there. Production is still out there big and small and in some places rapidly growing, but it's just is being done differently. I am thinking of high school sports, college sports, houses of worship, and productions being done right in the “home office” living room, or even the backyard. Productions that need to be done in 4K, as well as the option to be able to layer in lower third graphics in real time during the actual recorded or live shoot, and not in post.

The JVC GY-HM250U Camcorder has a good overall front to back balance and functionality with two built in SD card slots, IMAGE 6 and is lightweight (2.4lbs.) Additionally, the JVC GY-HM250U Camcorder has a built in microphone, which has a good pick up range without a ton of extra ambient noise. I found that out again as I was recording in my “home office/studio” on the fly. Even though I was fairly close to some appliances, background was minimum until the icemaker and the compressor kicked in. Overall, pick up was good. Of course I am always going to opt for putting an external microphone on everyone and everything. But sometimes you need to just run with the built in microphone.

Next I went through the audio controls built into the handle. Audio controls with 2 full size XLRs, auto and manual settings, and choices of line or microphone settings.

The handle also had a shotgun mount that one could easily mount a short RODE shotgun and connect using a pigtail XLR while leaving the second channel open. I hope that audio is as just important to you as it is to me.

Facebook and YouTube are two platforms that dominate content distribution. It is estimated that by the end of 2020, Facebook will have gone up to a total 1.69 billion users, according to Statista. According to Oberlo, YouTube has nearly 2 billion users, with a saturation rate of 79 percent.

I like those numbers, how about you? The JVC GY-HM250U gives you the ability and opportunity to reach a worldwide audience. That has a really nice ring to it, doesn’t it? Here is how it happens.

We are looking at connecting Facebook as our example. One can connect via a LAN adapter or if you need to be wireless, a Hawking Wireless Adapter, which gives you a really solid connecting point for wireless work. Then I went to the menu and stepped through the connection wizard. There is a great tutorial for the whole process also available on YouTube.

It was recommended to set up the camera to H.264 which works with all streaming formats. The next step was to log in using the Facebook passcode provided with the camera. The connection will remain active for 60 days.

One other feature that I do like is that you can live stream and record on the camera at the same time. There are some recording limitations on a few formats, but overall the recommended H.264 should be fine for the majority of live productions. Lastly, the choice of distribution channels will always be yours or your clients, but we are talking about live streaming to a potential audience of billions.

Mark J. Foley, MBA BA is an award-winning producer and director and the Technology Editor for ProductionHUB.com. He is on a mission to provide the best in new equipment reviews, along with exclusive analysis and interviews with the best, the brightest and most creative minds in the entertainment and production business. Have a suggestion for a review? Email Mark at mfoley@productionhub.com.